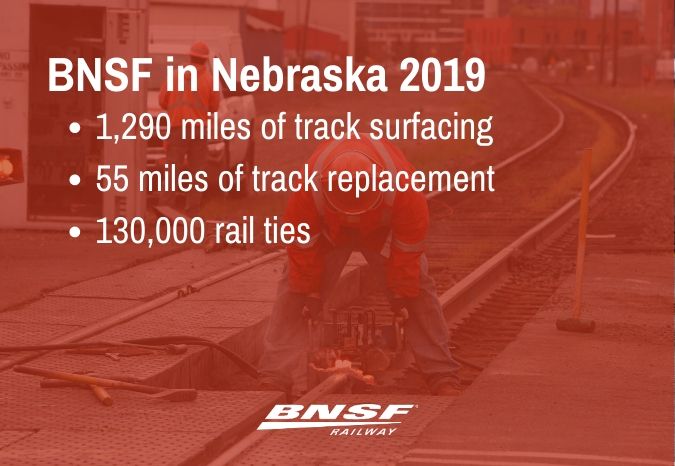 LINCOLN, Neb., February 27, 2019 – BNSF Railway Company (BNSF) today announced that its 2019 capital expenditure program in Nebraska will be approximately $140 million and will remain focused on maintenance projects to ensure BNSF continues to operate a safe and reliable rail network. The largest component of this year’s capital plan in the state will be for replacing and upgrading the main components for the tracks on which BNSF trains operate including rail, rail ties and ballast.

The 2019 maintenance program in Nebraska includes approximately 1,290 miles of track surfacing and/or undercutting work as well as the replacement of about 55 miles of rail and about 130,000 ties. BNSF has invested more than $880 million to expand and maintain its network in the state since 2014.

“Maintaining a strong infrastructure in Nebraska ensures that the state’s economy continues to grow by linking it to markets around the globe,” said Leif Smith, general manager of operations, Powder River Division. “Providing a world class rail service is critical to meeting our customer’s demands.”

The 2019 planned capital investments in the state are part of BNSF’s $3.57 billion network-wide capital expenditure program announced earlier this month. These investments include roughly $2.47 billion to replace and maintain core network and related assets, approximately $760 million on expansion and efficiency projects and about $340 million for freight cars and other equipment acquisitions.