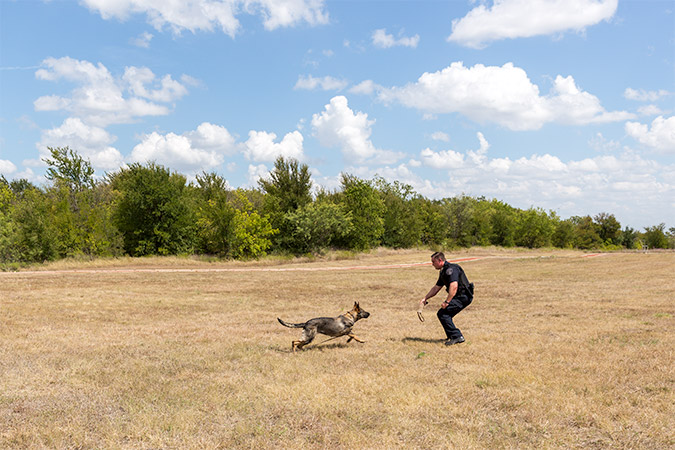 They say a dog is a man’s best friend, but at BNSF they’re also a man’s (or woman’s) most loyal co-worker.

The railroad’s K-9 program was created to help BNSF special agents patrol the tracks and ensure the security of our network. The program is rigorous, requiring the special agent and K-9 to train and live together, making them true partners.

Recently, we were given the opportunity to view a demonstration with Nathan Allen and his K-9 partner Valet at BNSF’s Fort Worth, Texas headquarters, where she practiced her obedience and explosive detection training.

“The interaction I have with my K-9 partner offers a level of trust, understanding, and a relationship that is always evolving,” said Allen. “The most rewarding part of being a K-9 officer is that we can bring this trust and bond out to the field to support a more efficient and safer operation for us all.”

The dogs and handlers train in narcotics detection, suspect apprehension, patrolling and engagement standards modeled after those of the National Police K-9 Association, with an emphasis on explosion detection that was added after 9/11. They train together for a minimum of 320 hours to ensure they are prepared for their certification, which takes place over the course of two days.

Being part of our K-9 team is strictly voluntary. To apply, agents must first write a letter of intent after receiving approval from two of their current supervisors. If the letter is accepted, they must pass an oral board interview with two K-9 supervisors, a handler and the program’s external vendor, who supplies the railroad with its K-9s.

“BNSF has one of the most progressive training programs around,” said George Daniolos, founder of K-9 Defense, BNSF’s vendor and training consultant. “We are on the same page about what we want to do training-wise, and we have a lot of freedom to move the program in a way that’s going to improve it.”

During the agent review process, the board looks at the applicant’s work history and evaluates how ambitious, productive and responsible they are – all important qualities for both the K-9 and their handlers. They also make sure that the officer’s housing environment is suitable for a police dog.

When patrol dogs are assigned to a partner at BNSF, they are treated as a member of the workforce and the family. Each dog lives with the agent’s family. However, they aren’t household pets, and there are strict protocols that must be followed by the officer when caring for the dog.

“We want our K-9s to be in a home environment that’s protected and where they are cared for properly,” explained Luis Mares, Deputy Chief of Resource Protection. “But, we need to make sure that the household understands that the K-9 is not a family pet or a toy, and they’re willing to abide by our rules with having the K-9 in the home.”

Once matched, the dogs and handlers learn the commands that will be used for on-duty communication. The program used to rely mostly on German, English and French commands, but now Greek is used as well. For example, “dino” – meaning “give” in Greek – is what a handler uses when asking the dog to release something, be it a reward toy during training or something apprehended in the field. English and Spanish are not used for words also used when speaking to a suspect to avoid confusion.

“It takes a lot of hard work, mental preparation, timing and physical exertion to have these animals work so well and respond to you,” said Mares.

BNSF’s police department primarily uses German Shepherds but sometimes Belgian Malinois or Dutch Shepherds join the force, if they possess shepherd-like characteristics. German Shepherds are known to be equally skilled across the board in the characteristics needed for a police dog: a drive to seek out prey, easy to socialize, obedient, talented at searching for a suspect and having a nose for detection. They also know when it’s time to relax when they’re off duty.

“We want a dog that has a high drive and ambition to work,” noted Mares. “but that also knows when to be quiet and settle down while off-duty.”

High visibility of the K-9 teams is key to keeping our railroad secure. They’re often found patrolling tracks, yards and other rail facilities, deterring trespassers and others with criminal intent from causing harm. That’s why it’s so important that these officers, human or otherwise, are thoroughly trained and on-guard.

“Unlike a human, you can’t reason with a dog who’s on patrol,” said Mares. “They’re there to work and search for suspects, and they will apprehend a suspect if directed to do so.” 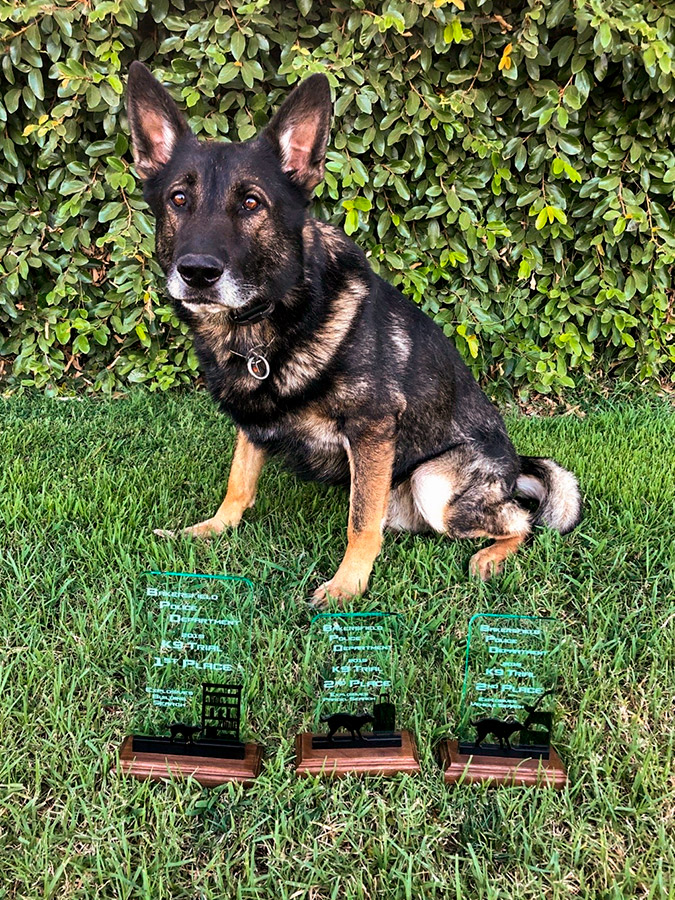 Cid competed against the Kern County Sherriff’s Office and other teams from surrounding California cities in Explosion Detection. He took first in building search and second in both vehicle and parcel search.