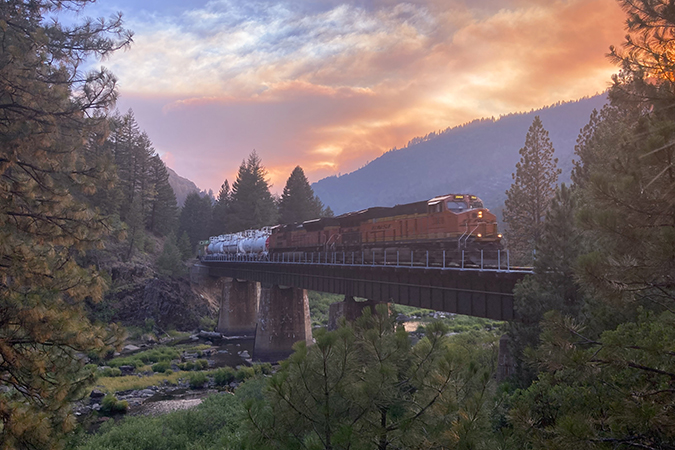 It’s been called the “the sleeping giant,” and every day we watch to see how this colossus behaves. Wind makes it rage, humidity can dampen it. The Dixie Fire, California’s second-largest wildfire in history, has a life of its own, one that doesn’t know night from day or forests from farms, recklessly destroying everything in its path.

“This fire is very much alive. It’s burned across the Gateway Subdivision at several locations, caused a tunnel to collapse and destroyed two of our bridges,” said General Director Line Maintenance Danniel MacDonald, Engineering, who has helped lead BNSF’s effort to minimize impact and restore operations since the fire was reported in mid-July.

BNSF trains run north and southbound between Seattle and Los Angeles through the affected area. Since the Dixie Fire, named for the road where it started, began burning, our teams have worked side by side with outside agencies to control what can be controlled – and get out of the way when we can’t.

To coordinate the response, a command center was established early, with the California Department of Forestry and Fire Protection (CAL FIRE) in charge. Some 5,000 personnel, including members of the National Guard, are working the fire, both on the ground with fire engines, water tenders and bull dozers and from the air with helicopters.

“We plan and prepare annually for wildfires as part of our Fire Action Plan, and that’s why we have a very coordinated response, solid plans to manage and assets deployed to mitigate,” said Brandon Archambeau, the general manager of our Northwest Division based out of Vancouver, Wash. “The key is communication and keeping everyone on the same page. Our mantra is ‘wired tight,’ which means we – all the employees here as well as from across the system – work safely in unison toward the same goal.”

Our Engineering teams are inspecting the track and structures, including dozens of bridges, several tunnels plus slide fences and trackside signals. The work is complicated by the altitudes, canyons, ridges and temperatures ranging from 40 to 100 degrees. To give a bird’s eye view, our drone team captures video to help with the assessment.

Smoke is a constant and impairs visibility; our Industrial Hygiene team has provided respirators, which are required for BNSF personnel working in the elements. There’s also the threat of large embers and ash falling. Giant trees felled by flames can crash, often across the tracks.

In the greatest at-risk areas, fire bladders – durable bags that can be filled with 10,000 gallons of water –and sprinkler systems are being deployed. Water and fire retardant are being sprayed, especially on bridges, to wet the crossties and structures to reduce the chance of them catching fire.

Meanwhile, train crews do their part by operating fire trains equipped with modified tank cars with pump systems to address fires directly from the tracks.  Our HazMat and Engineering teams are on board the two trains, manning the pumps. Elsewhere, tank cars are strategically staged and act as fire hydrants; generators are also placed near our telecommunications systems in anticipation of power outages.

The safety of our people is paramount, with safety briefings a constant. “We make sure all employees are accounted for when working in fire areas or when they have to be evacuated,” said MacDonald.

To keep our customers’ shipments moving, we’re rerouting trains east and then back west on our routes, or detouring trains to the west on another railroad’s line. Meanwhile, we’re closely watching the Keddie Wye, a junction where BNSF trains and those of another freight railroad meet and split.

After nearly four weeks, the fire has burned 500,000-plus acres and hundreds of structures, turning what was once green to black and taking whole towns off the map. Containment is underway, though slow given the hot and dry conditions of the region. Weather patterns are scrutinized, and the promise of rain is welcome, though there is always the worry of lightning strikes.

Like the weather, the Dixie Fire is unpredictable. But one thing we know, our people stand at the ready to safely restore service, the wired tight way. 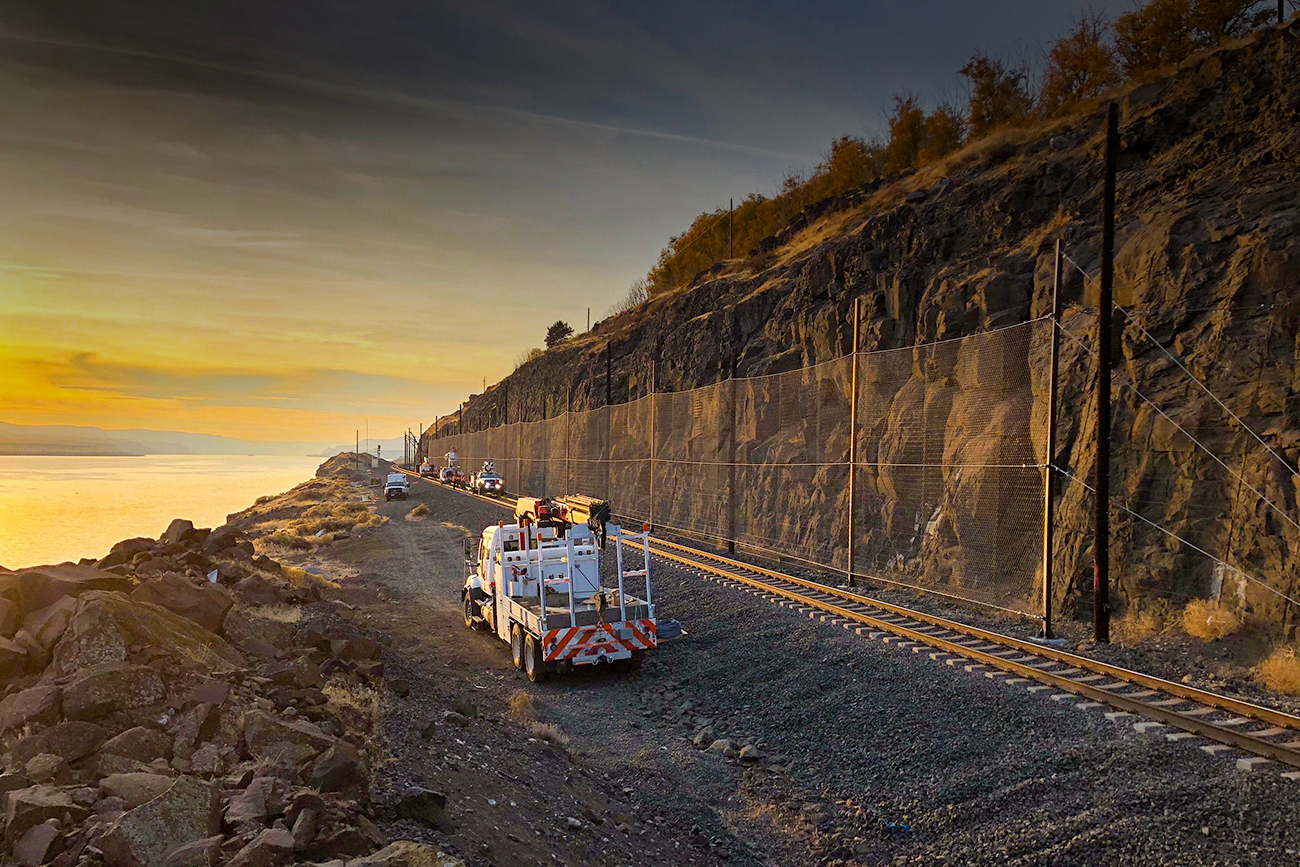 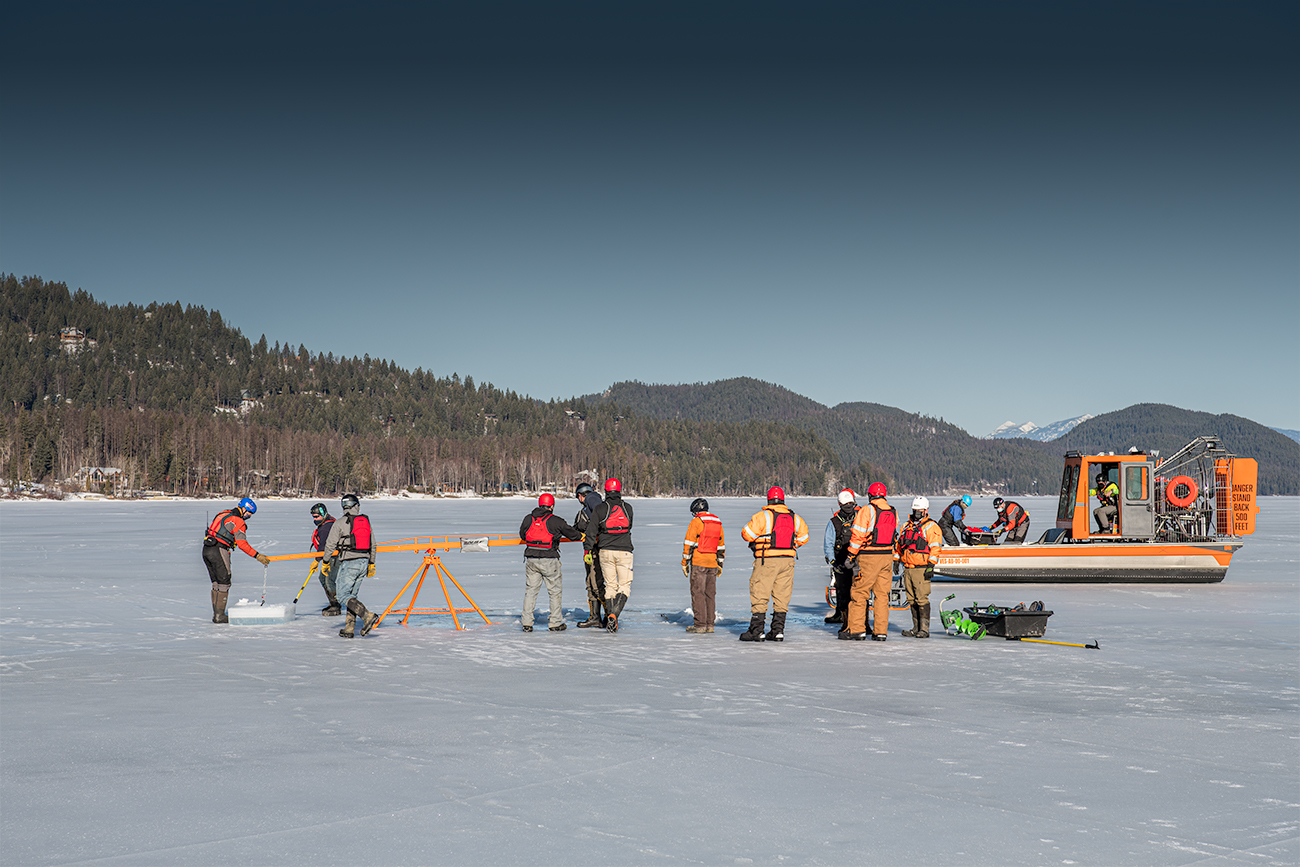